Behind Es Viver begins the fine white sand of Playa d’en Bossa, the longest beach on the island, and the border with the municipality of Sant Josep. For a long time, Playa d’en Bossa was considered Ibiza’s most beautiful beach; now the islanders leave the bathing fun in the shallow water behind the almost complete hotel chain to the vacationers who like it lively. The numerous planes that approach the nearby airport over Playa d’en Bossa are perceived as annoying. On some parts of the beach, such as Bora Bora Disco Beach, the droning music drowns out the aircraft noise. 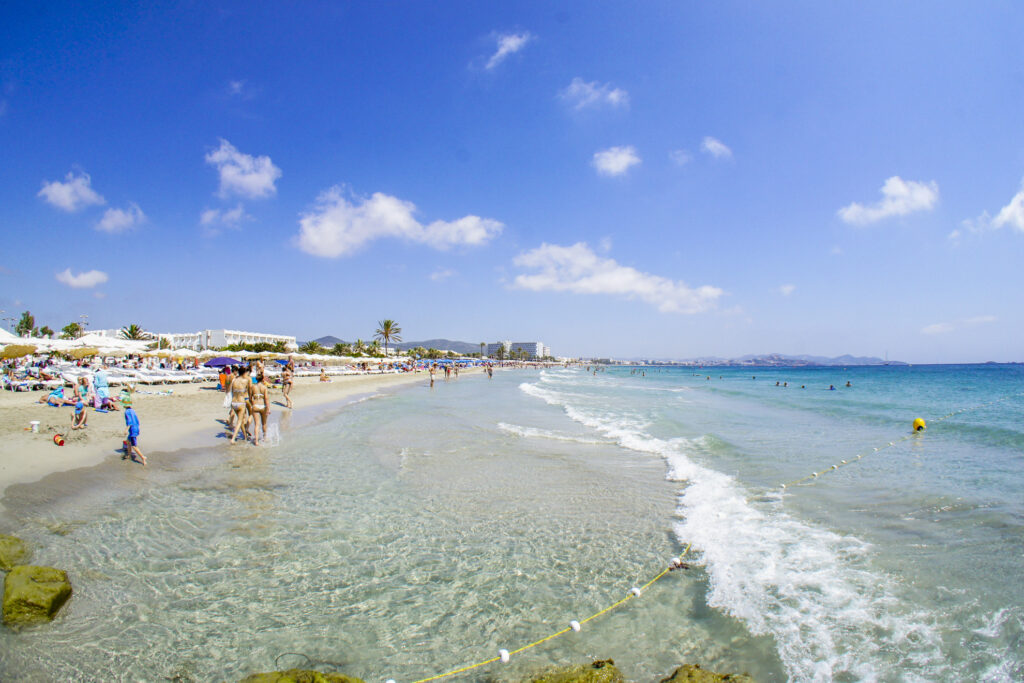 In the area between the usual restaurants, bars and shops there are also a few discotheques, including the former Space, today Hii, which as a daytime disco caused a sensation among those who wanted to dance Ibiza’s nightlife 24 hours in a row. Right next to it is the Aguamar, another amusement park with water slides

At the very end of the beach, on the edge of the Ses Salines nature reserve, rises the Torre de la Sal Rossa, one of the oldest on the island. In the Middle Ages, watchmen kept a lookout for pirates to warn the salt workers with smoke signals in the event of imminent danger.

With almost 3km the longest beach on the island. The municipal boundary between Ibiza Town and San José runs between the Hotel Algarb and the Club Garbí. Playa d’en Bossa, with its fine, white sand that stretches flat into the sea, has long been considered Ibiza’s most beautiful beach.

Approx. 1km long sandy beach in a nature reserve with extensive dunes. The salt pans of the salt flats extend behind them. Es Cavallet is one of the two naturist beaches on the island (the other is Aguas Blancas, in the municipality of Santa Eulalia). At the beginning are the restaurant S’Escoller and the beach shack El Chiringuito, further back is the Chiringay (Gay Beach), which is frequented by homosexuals. Sometimes it is a bit steep into the water and there is always a fresh breeze. The walk to the end of the peninsula, where the old fortified tower Torre de ses Portes guards the southernmost tip of Ibiza, is wonderful.

The other wide sandy beach in the nature reserve of the salt pans is also almost a kilometer long and gently slopes into the water in a child-friendly manner. Under the pine trees that cover the dunes, Ibizan families enjoy their Sunday picnic. Various beach bars from the elegant Jockey Club to the hip Sa Trincha provide background music, some with their own DJs. Ambient parties take place on some summer evenings. It gets quieter further back in the small rocky bays that stretch all the way to the old defense tower Torre de ses Portes.

Almost 3 km long beach, where there is no sand, but pebbles washed round by the sea. Therefore, even in midsummer there are only a few tourists. It’s also the southern approach lane for the airport, which is just behind the beach. There are some nice bars. The restaurant at the southern end of the beach at Cap des Falcó next to the salt flats is recommended.

Quiet little fishing bay surrounded by boat huts north of Es Codolar. The seabed is rocky. On the rocky plateau above is the site of the first Phoenician settlement on Ibiza, which is part of the UNESCO World Heritage. 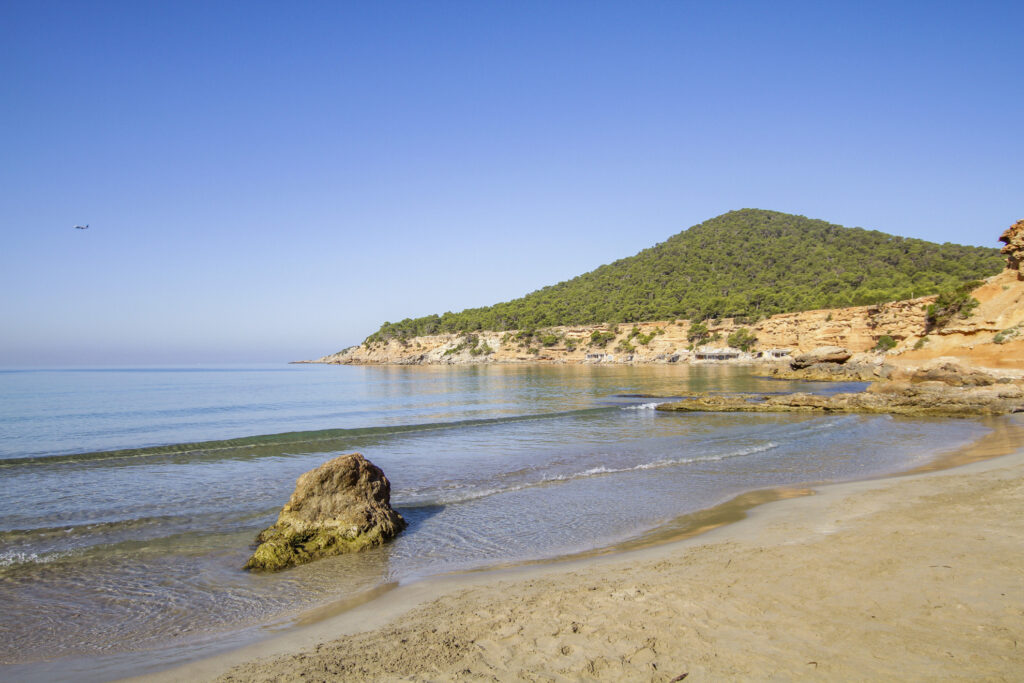 On the other side of the rocky plateau of Sa Caleta lies this small, narrow bay with fine sand and shallow water, picturesquely surrounded by steep red cliffs.

As the sea washes away the sand each winter, the San Jose Mayor’s Office has given up pre-season sand replenishment. Since then, Cala des Jondal, a few hundred meters long, has been a pure rock and pebble beach. Despite this, she has remained very popular. Numerous beach bars and restaurants spread a Caribbean ambience. Live music is not uncommon. 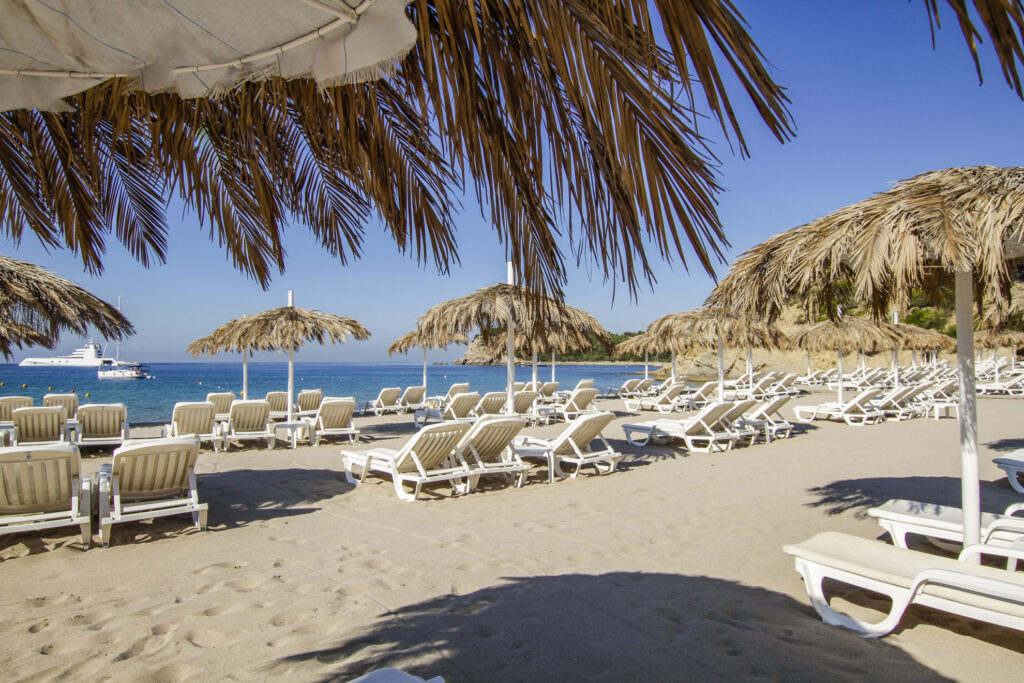 Pretty little pebble beach between Cala Jondal and Porroig, away from the seasonal hustle and bustle. Good fish restaurant! 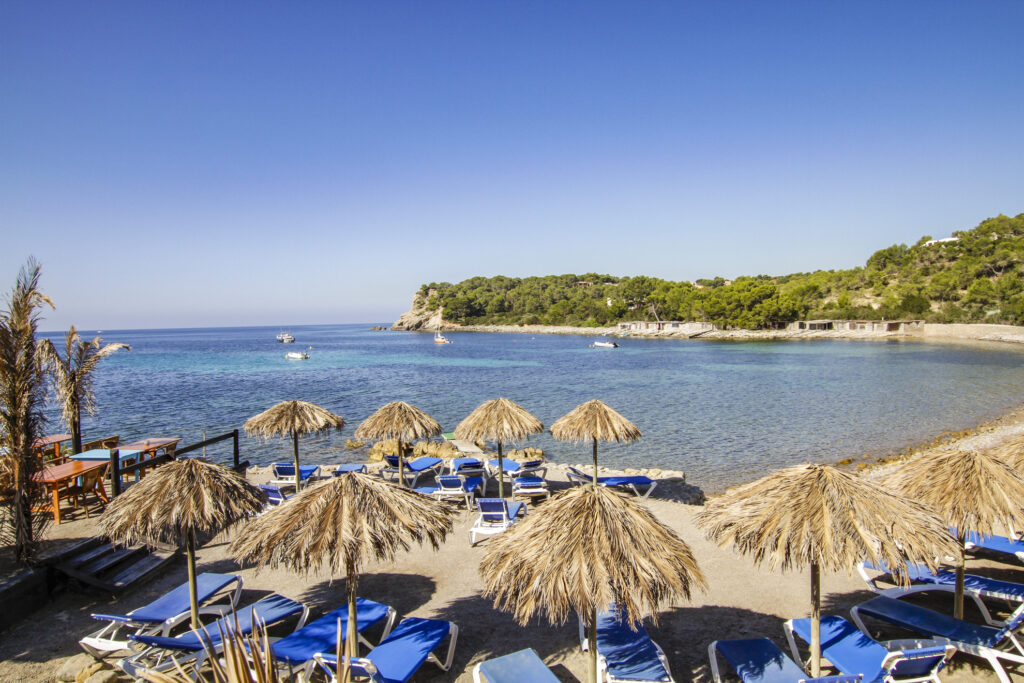 Pretty little pebble beach between Cala Jondal and Porroig, away from the seasonal hustle and bustle. Good restaurant! 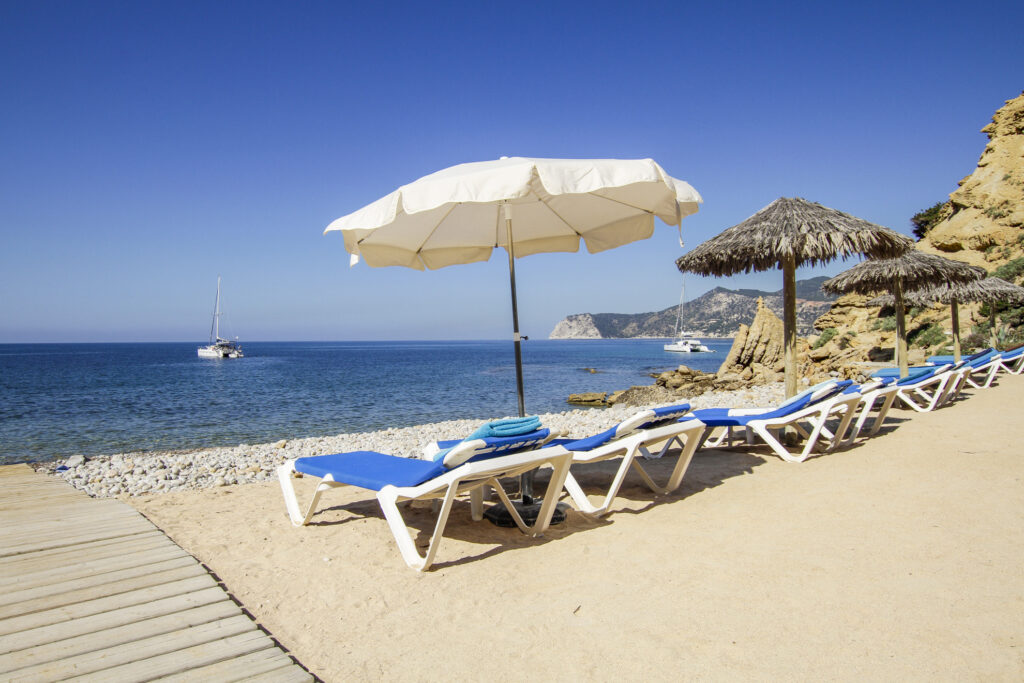 In the wide bay between Punta de Porroig and Cap Llentrisca there are several small mini beaches, but they are difficult to reach because we are on a cliff here. The Playa des Cubells below the place of the same name is one of them. The steep path is a challenge for the procession of the patron saint of sailors, Virgen del Carmen, which is celebrated on July 16th every year. The statue of Our Lady is carried down from the church to the beach, then taken out to sea by boat, where offerings of flowers and laurel are scattered on the water.

About two hundred meters long sandy beach in front of the dramatic backdrop of the 382m high rocky island of Es Vedrà. The beach is family-friendly. At its end are some old boat huts. Various restaurants offer their services. A dinner at sunset, with the black silhouette of Vedrà rising, can become one of the highlights of the holiday. 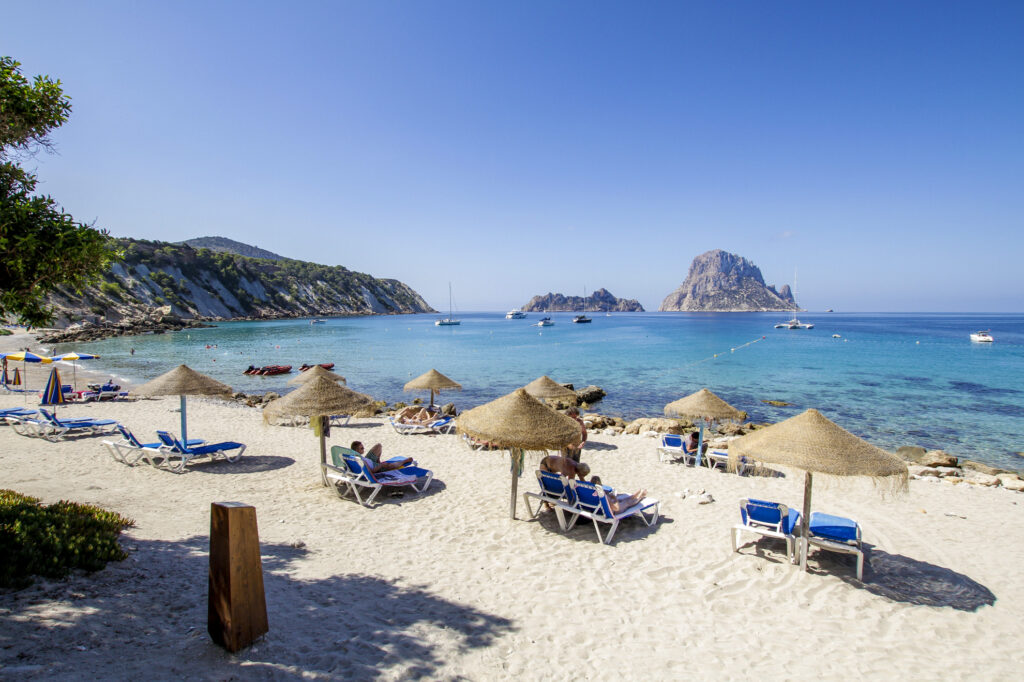 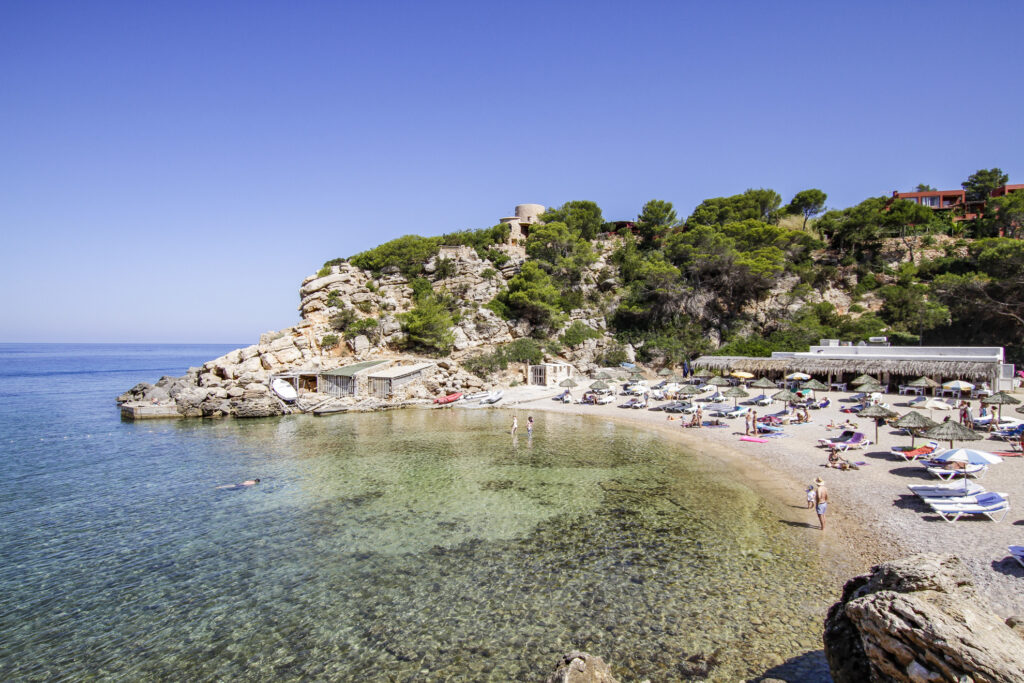 Unfortunately, the bay with its beautiful sandy beach, which cuts deep into the country, has been completely built over by hotels and holiday apartments. If you love the developed holiday, this is the place for you: beach promenade, pubs, restaurants, diving schools, everything a holiday resort could wish for is available.

Small bay with a short sandy beach, which is particularly popular with boat owners. The rocks are good for snorkeling; there is also a diving school.

Just behind Cala Molí, just opposite the Ses Bledes archipelago, is Cala Tarida. This family-friendly, approximately three hundred meter long sandy beach is also fully developed for tourism. The slopes around the bay are densely built up.

The small sandy cove of Cala Codolar with shallow water is a bit quieter than its busy neighbors. You just have to watch out for the many surfers when swimming. There is only one beach shack on the beach itself, and the Delfin Playa holiday resort sits enthroned on the slope above.

Several short sandy beaches with beautiful views of the islands of s’Espartar, Illa des Bosc and Sa Conillera. The sea cut small coves in the sandstone cliffs, where sand was deposited abundantly, both on the beach and in the sea. Crystal-clear water and a constant breeze that makes the waves pound high ensure bathing fun. Pleasantly little development.

Cala Bassa is already on the southern side of the bay of San Antonio, a short deep sandy beach with pine trees. In the summer it is almost entirely occupied by English youths who come over from San Antonio on tour boats. There is also a campsite nearby.

In the tourist age, a whole holiday center has grown around the beautiful bay with a sandy beach and a long row of old fisherman’s huts, reaching far into the hinterland.

Cala de Bou, with five small sandy beaches, occupies most of the southern side of San Antonio Bay. The large hotel buildings merge seamlessly into one another. Beyond are two wide main streets and numerous side streets with shops, car rentals, pubs and restaurants. The border between the communities of San José and San Antonio runs along the narrow Playa des Pouet.