On the east side of Cap des Rubió is the small fishing port of Es Portitxol. Since it is a bit difficult to reach and has hardly any sand but only pebbles, you are fairly undisturbed here even in the high season. You drive from San Miguel towards Isla Blanca. Isla Blanca is the name of a large-scale urbanization whose construction has been stopped by the authorities. Once you have passed this ghost town, a dirt road to the left, which you have to walk, goes around the bay down to Es Portitxol. Bring a picnic, there are no beach shacks!

In the port of the village of San Miguel, no more ships dock except for kayaks and rubber boats; it has long since turned into a holiday resort. The sandy beach is short but extends deep inland; several large and small hotels, restaurants and shops create a holiday mood.

Less crowded and scenically more beautiful because it is unspoiled is the tiny Cala des Moltons directly to the left. There is only one beach shack on the sandy beach; once a week the owner grills fresh sardines on the grill. You can easily walk across from Puerto de San Miguel on a narrow coastal path.

Bay cuts deep into the land with a wide sandy beach, which has been spared from hotel buildings. In the middle, a prominent rock protrudes from the water. Old fisherman’s huts on the sides provide a romantic setting. Two newer restaurants have joined the small beach shack. Benirràs became famous as a hippie beach where people still drum for peace at sunset and especially on full moon nights. Rock star Nina Hagen celebrated her wedding here in 1987. However, the idyll is threatened by a planned urbanization and many leisure captains.

The wide Cala de Xarraca high up in the north of Portinatx is one of the most beautiful bays on the island. The coast is rocky but not very steep. You can walk quite well on the cliffs in some places. At the beginning there is a private house right on the water, far back at the Ostend there is an apartment block, in between you can enjoy the wild and romantic nature undisturbed.

Approximately in the middle of the bay, a signposted path leads down to the small Playa s’Illot. There is a narrow strip of pebbly beach by the water with a wonderful view of the offshore islet and a fairly new restaurant with a pebble path and lantern lighting.

Just a short distance further, a signposted sandy path leads steeply down to Cala des Xuclar, the only sandy beach in the bay. A lot of reeds grow here and there is also a beach hut.

Portinatx is the northernmost point of Ibiza. In the bay that cuts deep into the land, the water has washed up fine white sand on a smaller and a larger beach (s’Arenal Petit and s’Arenal Gran). A large holiday center has developed around it, with many hotels, several streets, bars, restaurants, shops, mini golf course, etc. Accordingly, the beaches are always overcrowded in summer. At the very end of the asphalt road there is another small beach, Playa des Port, which is a bit quieter. There is also the diving school. And if you continue walking straight ahead over the flat cliffs to the peninsula of Sa Gladiola, you suddenly find yourself in complete solitude.

Two towers invite you to take longer walks: on the west side of the bay is the old defense tower Torre de Portinatx, which is already surrounded by the holiday resort. From here you have a beautiful view of the neighboring bay of Cala de Xarraca. It is a little further on the east side to the green and white painted lighthouse on the Punta des Moscater.

Fantastically beautiful small bay with a short sandy beach in the east of Portinatx, which has unfortunately been defaced by the ruins of a hotel complex for decades. First, the reason given for not demolishing was that the owners could no longer be found; now the island council is considering whether the building, which is said to have been designed by the well-known Catalan architect Joan Lluis Sert, could perhaps still be saved. A small beach shack has recently taken care of the well-being of the few bathers.

Small fishing port on a rocky coast. Except for the old boat huts, there is nothing of civilization to be seen, not even a beach hut. The drive from the village of Sant Vicent de sa Cala into the solitude past terraced fields and old farmhouses is particularly beautiful.

The wide sandy beach, which slopes gently into the water, is particularly family-friendly. On the left, Punta Grossa rises 175m high, straight ahead you can see the island of Tagomago, which is a nature reserve, on the right you can see the beach of Aguas Blancas in the distance, which already belongs to the municipality of Santa Eulalia. In the back, however, there are a number of high hotel buildings that disturb the beautiful landscape. 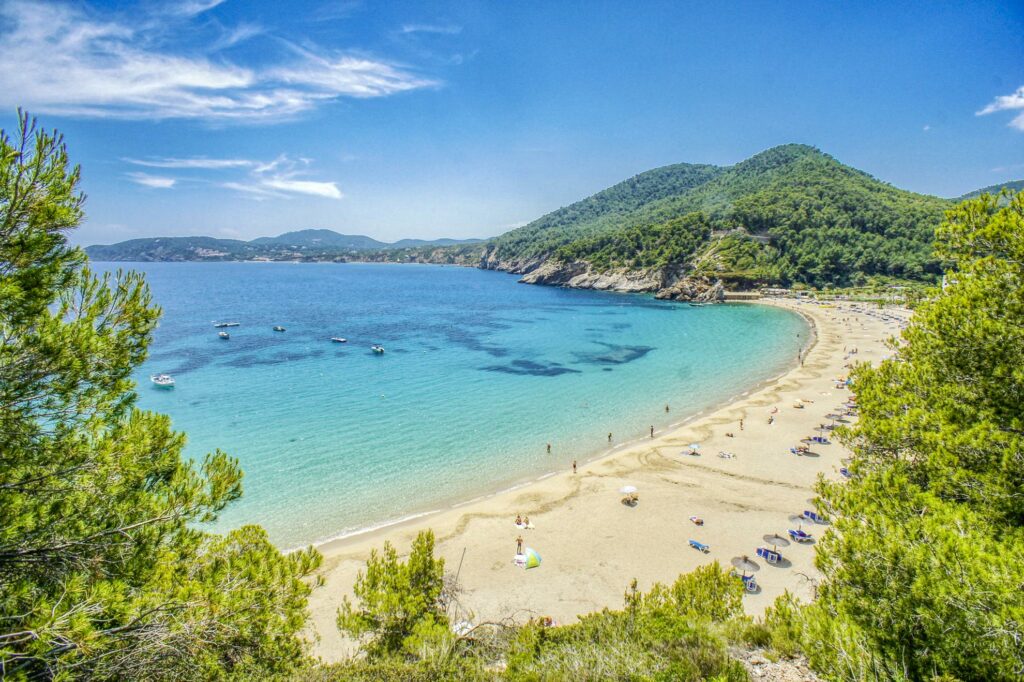 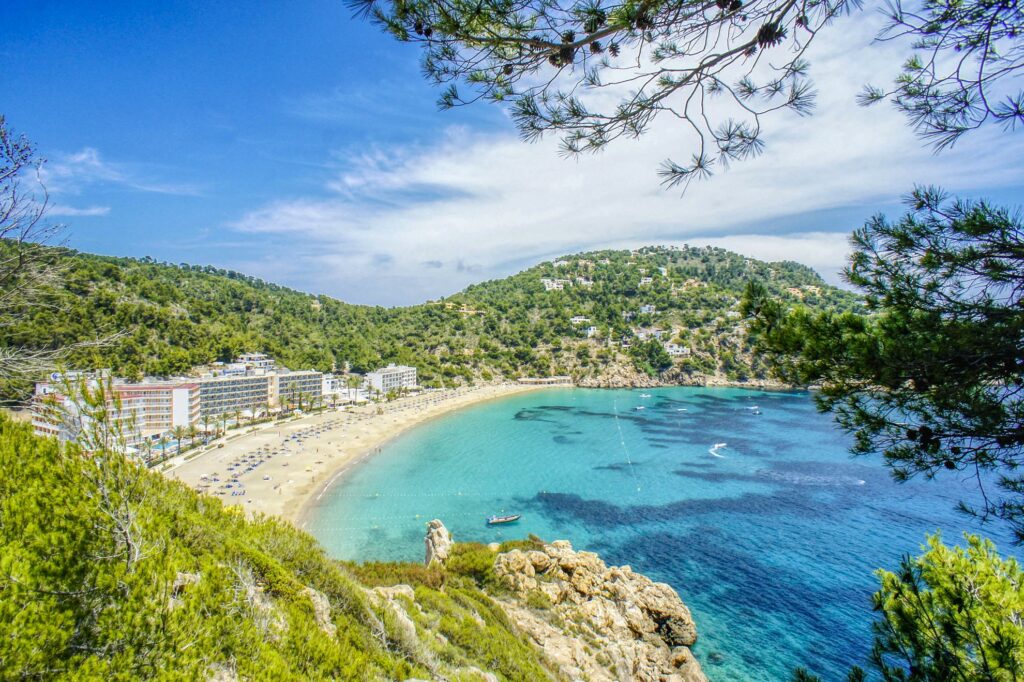